Do you want to change pricing plan? Proceed Here

Be the first one to rate! Submit Review

Kieran graduated with a LLB (Hons) in Law from University of Ulster in 1995 and completed a Masters in European Law in 1996. He trained and worked at a leading London firm for a number of years. He joined P.A. Duffy & Co in 2001 and became a partner shortly afterwards. He is qualified to practice in Northern Ireland, Republic of Ireland, England and Wales.

Kieran’s expertise enables him to provide advice on matters such as business and property disputes, challenges to wills, professional negligence actions, large developments and compliance issues.

Kieran has a wide client base which includes a number of large property Investors and developers, construction businesses, industrial businesses and private individuals.

He is also a Notary Public having been appointed by the High Court to hold this role in 2018.

Kieran loves to cycle in his limited spare time and has competed in many lengthy sportive’s for charity and personal torture throughout Ireland. He also is a committed youth coach and manager with his local GAA club. 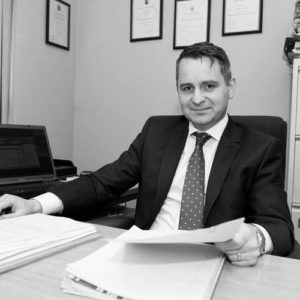 Rate us and Write a Review